On an unusually hot sunny April day 7 year 13 students took part in an exciting dig located on top of Coxhill mount in Kearsney Abbey. The purpose of the big was to prove that the location was once used as a Bronze Age barrow. The dig was the second in a series that are taking place alongside the regeneration of Kearsney Abbey and Russell Gardens.  (For more information please click on the link www.kearsneyparks.co.uk) .

The day began with students walking up to the proposed barrow site and then digging a 1.5m by 10m ditch. 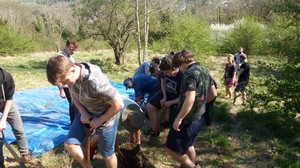 As part of the process the students were shown how to identify Neolithic flint which they found in abundance. 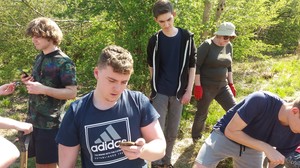 They also found a piece of coral which was estimated to be 800 million years old. It was hard going and extremely physical work which the students carried out enthusiastically. 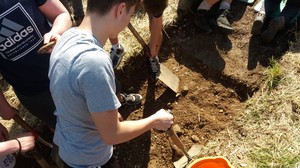 The students also helped to find the edge of the barrow which was then excavated over the weekend.  At the end of the dig it was confirmed that the location was once a Bronze Age barrow.

Keith Parfitt who led the dig commented on how impressed he was with the effort of our students and has welcomed us to take part in future events.